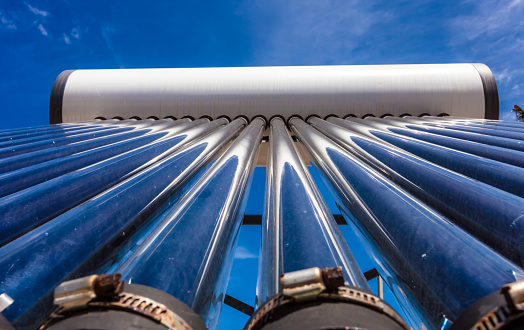 The growth of the renewable energy sector has led to a rapid increase in the number of people employed in the renewables industry. This is reflected by an increase in undergraduate degrees offered within this area, including Renewable Energy Engineering at the universities. But what exactly does “solar energy engineering” do? And why is it important? 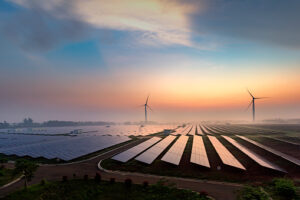 The Sun’s energy reaches Earth with about 1000 watts per square metre (1 kW/m²) at noon on a clear day. Most of this energy is absorbed by the oceans and land, but part of it reaches the atmosphere as visible and infrared radiation.

For example, the green light has an energy of about one-third of yellow-red light, while blue-purple light is even more energetic.

However, plants do not use blue or purple light (which are called “short-wave” colours), but green and yellow-red light (“long-wave” colours) in photosynthesis to create energy compounds like glucose.

Here, we are interested in solar energy captured by devices to convert them into energy available for humans. To date, harnessing that energy has been prohibitively expensive. But with solar energy systems, it’s now possible to move towards a renewable energy future in cost-effective ways.

It is the study of combining several components to produce electrical power, heat, or cool air. It is a branch of energy engineering concerned with utilising and integrating solar-generated energy into existing electrical power grids.

It may also involve concentrating highly reflective materials to store heat or convert light from other sources to generate electricity or useful heat.

Also, it uses many parts of engineering including fluid mechanics, thermodynamics, materials science and mechanical systems. Solar engineering is also used with green building concepts to be energy efficient for heating and cooling purposes.

A multitude of machinery uses solar power to generate energy. Electricity can be produced through direct current (DC) or alternating current (AC). DC electricity is used more often than AC for small scale applications. Solar-powered vehicles are also becoming popular, with many companies bringing out research on their new models.

Dynamic systems of analysis and design within the context of emergent multi-disciplinary theory, subject to the rigours of analytical thermodynamics, fluid mechanics, chemical kinetics, electrical conductivity and electromagnetism (the latter two universal physical constants), will become even more essential in the disciplines of solar energy engineering as new tools for advanced analysis are developed based on accelerated rates of technological change.

Solar systems have virtually no negative effect on the environment because there are no emissions associated with their use.

Also, the solar industry does not contribute to pollution through greenhouse gas emissions. The main environmental concerns when using solar energy are global warming potential (GWP) and land-use requirements. 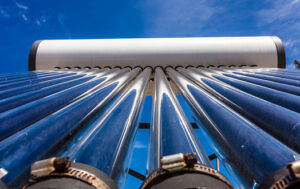 There are three types of solar water heating systems used today, active, passive and hybrid, depending on their mechanical engineering systems.

Heat pumps are used to improve the temperature of space during the day, this is because they have higher efficiencies than other types of heating equipment. The air conditioning aspect allows houses or buildings to stay cool during the hot summer months by using the same process that a refrigerator uses to remove heat from the room.

Solar energy engineering affects both systems because electricity is needed in both cases but could be produced through photovoltaic cells with no negative environmental impact. This then reduces carbon footprints or GWP’s. These systems could also trap heat within walls instead of having exterior insulation which has less impact on trees surrounding them, thus reducing deforestation.

One of the most popular solar energy collectors today are photovoltaic (PV) cells. A PV cell is made up of crystalline silicon, which, when exposed to sunlight, is known as a photo-voltaic effect.

When sunlight strikes these cells they emit electrons, thus producing electricity that can be used in homes or businesses.

Another type is called the solar thermal system. A solar engineer uses mirrors to concentrate sunlight onto an engine that produces steam, which drives turbines for generating electric power. It also emits hot fluid, which can result in low-grade heat transfer.

This form is currently more productive than photovoltaics because it has higher efficiencies and lowers costs but slightly higher energy consumption.

Solar cells can be used for PV systems to create electricity that could power homes and businesses. Collectors are made up of crystalline silicon panels which absorb sunlight, thus creating electrical energy to supply buildings without any carbon footprint.

Around the world, this type of system is one of the most popular and has been rapidly rising in use over the past decade by solar engineers.

One point to consider when using solar cells is the amount of land required. These systems would only need a small percentage compared to other forms at about 1-2%.

This then makes it more attractive as an alternative form than fossil fuels such as coal which require large amounts of space.

Concentrating solar power (CSP) systems are different from other forms because they have higher efficiencies and can generate more electric power per area used. One of the most popular types of CSP systems is called troughs where parabolic mirrors are placed on both sides that focus sunlight onto a tube that runs through them, heating water or oil inside it up to 400 degrees Fahrenheit.

Another older type is called tower engines. Hundreds of heliostats concentrate light onto a central receiver instead of just one flat mirror that produces steam that runs a generator. This type of system has been in use since the 1980s, but there have been recent improvements that have led to higher efficiencies and lower costs.

The main environmental concern with these types of solar projects is high-intensity light and heat, in addition to noise and electromagnetic fields. Still, it offers an advantage over fossil fuels in that it emits no greenhouse gases or air pollutants. 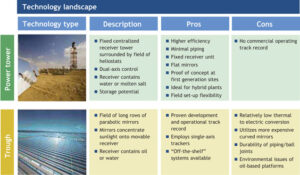 Hence, solar energy engineering is a process by which complex, large-scale technical products are designed, specified, constructed, maintained, and disposed of to minimise total ownership costs over the lifetime of such a system and unforeseen risks with the help of technology development.

Solar energy is one of the most abundant renewable resources available today. It has both positive and negative effects on our environment but is also widely used worldwide. The implementation of new technologies such as solar thermal systems shows promise in moving towards a low carbon future with less non-renewable natural resources.

How to Install Solar Panels? 4 Easy Steps To Follow

How Efficient Are Solar Panels In 2022?